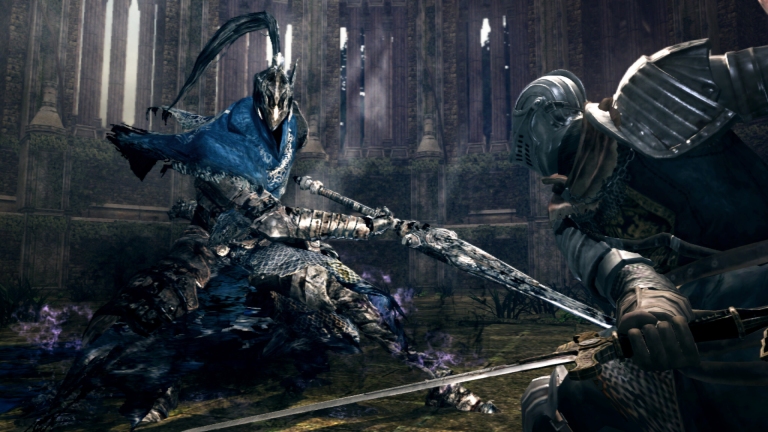 Late last year, when I first came up with the idea to write about a game every day, I started to engage in my least favorite part of the writing process – attempting to organize my scatterbrained thoughts into something workable. After all, 365 is a large number, so I thought it for the best that I at least make an initial list of games that I’d want to write about.

“Dark Souls” I started typing, almost unconsciously, before moving on to any of the others.

Every morning, I look back at that list, to see if there’s something I’m in the mood to approach and every morning, sitting at the top of the list, it stares at me.

My relationship with Dark Souls is a complicated one. Such a word may seem incompatible when describing one’s experiences with a video game, but that’s really what it’s been – a relationship. We met through an attraction and a curiosity, slowing revealing our true nature to each other, which in turn would lead to conflict, frustration, and eventually, moments of bliss.

To say that I was dismissive of Dark Souls upon release would probably be disrespectful to the implied strength of the word “dismissive”. I not only had no interest in the game, but found myself oddly judgmental of the people that choose to engage with it. I watched Dark Souls take over lives for months on end. It became the ultimate Let’s Play game, even beyond the webcam screamer crowd that I have less than no time for. People that I respected fell in love with it, seemingly even more so every time their character met a demoralizing end. I couldn’t understand, for the life of me, why they would waste their time with this awkward, unforgiving game.

If only to figure out what the big deal was, I would eventually try it myself.   I spent a few hours fighting overpowered skeletons, getting angry, and then shutting the game off, determined to never touch it again, calling back to my brief flirtation with masochistic rom-hacks, assuming that some people simply loved torturing themselves with overly difficult games and that there was nothing more to it.  It was Kaizo Mario all over again.

It wasn’t until years later that I would find myself revisiting it on a whim. Soon after, something clicked, and for a while, just like I’d seen with so many others before, it took over my life.

I’m reminded of an experience I had long ago writing for a site that will, for their benefit, remain nameless. I was given the task of writing a review for an relatively obscure PS2 game called God Hand. I gave it a 3. A perfectly respectable score on a 5 point scale.

The problem is that we graded on a 10 point scale.

I was vicious, delivering the sort of sardonic prose that I generally reserved for bad movie tie-ins and wrestling games. To my surprise, only a few days later, the site then published an alternative review of the game, which was really more a review of my review, ranting about how wrong I was. Such things I learned were shockingly common in the entry-level game journalism scene, but my rival reviewer actually raised some salient points about things I had missed, whether it be mechanics that I misunderstood or simply weren’t spelled out by the game.

Revisiting God Hand later, I actually found myself liking it quite a bit, and I couldn’t help but recall how I’d approached that game when I was trying to learn the ways of Dark Souls. There was an appeal to my fighting game sensibilities that I found useful when trying to hone my skills; an emphasis on animation priority that seemed to demystify my initial roadblocks. The game that, by reputation, was seen an exercise in futility slowly started revealing itself as much easier and more fair than I’d anticipated. Like a relationship (or at least, an honest one), the more I put in, the more I was rewarded.

There’s a real old-school sensibility to that. It’s a common sentiment these days to point out how much easier and more linear games have become over time, prompting a “back in my day” filibuster from crotchety old curmudgeons like myself, but it’s hard to deny that some things feel lost back in the pre-achievement era, when beating a game didn’t just feel like a reward to the player, but in an odd way, felt like the player rewarding the game by continuing to engage with it to the bitter end.

Dark Souls, more than most games, seems to live off of that relationship with the player, not only in its gameplay but in the way it presents (or doesn’t present, in some ways) its narrative. It’s for the detail hounds, the obsessive, those of us that write blogs or create lore videos on Youtube.

Plainly, it’s a game I never knew I wanted, and when I was ready to accept it, Dark Souls forgave me, taking me in its forgiving embrace… only to then crush me under giant boulders and throw me off of ledges over and over.