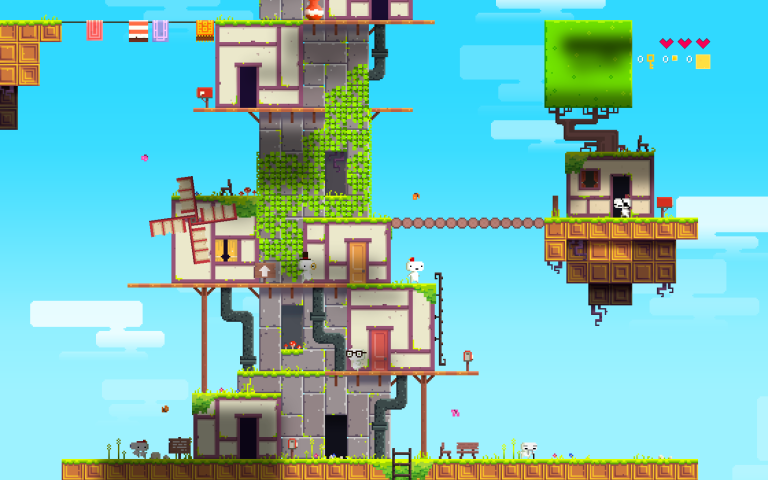 The only thing I find worse than waiting on the release of an anticipated game is when the game is out and you can’t yet afford it. I’m having that moment with the Witness right now and it’s pretty rough, especially since I keep hearing how important it is to go into that game with a blind, untainted perspective. I typically don’t care about spoilers, whether it be story beats or the reveal of solutions, but there are certain cases where I want to allow myself to get lost in a world uncompromised, free of any outside influence.

I revisited Fez today; not for terribly long, but just enough to remind myself of where I finally stopped. If I read the situation correctly, I was at a point that required a lot of backtracking and if I know Past-Damien as well as I think I do, he wasn’t keen on doing much of that whilst continuing to take notes on everything. See, I was one of those nutsos that thought he could finish the game on his own, using sheer willpower, intellect, and notebooks filled with shorthand to guide me. Acknowledging that Past-Damien is kind of a moron, it went slightly better than you would expect.

For a game that needed a group of people to consciously brute force its biggest puzzle and frequently congregate online just to understand a lot of the smaller ones, I never really had a chance, and I think I knew that going in. The story of Fez was never going to be about whatever big reveals turned up at the end so much as how its audience came together to get there. In hindsight, Fez is going to be remembered for a lot more than that, for better or worse.

I try to distance myself from that as much as possible, if only because I know I would hate if I spent so much time and effort creating something to the point that it drove me insane, only for that creation to be overshadowed by said insanity. I suppose on some level, Phil Fish probably welcomed that, but at the same time, I wonder if anyone walks up to him now and just goes “hey, look, you made a good thing.”

Someone should. He made a good thing.