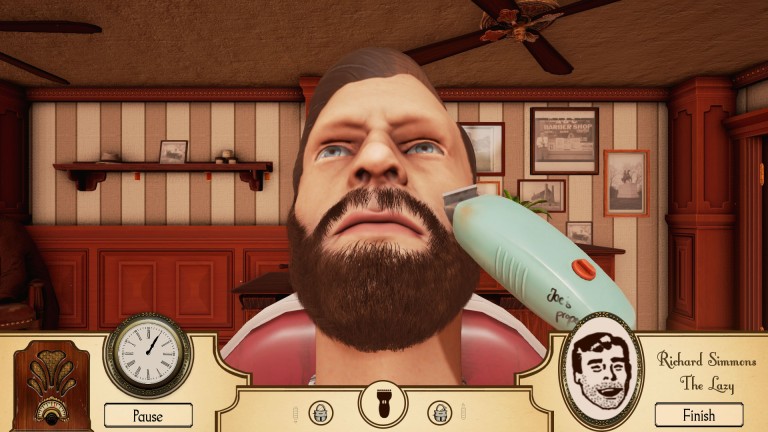 Though the simulator genre has long passed me by with its constant need to mimic experiences I already don’t want to do in the real world, I feel the need to commend those that still trying to create games and not just one-note jokes dripping with a little too much self-awareness. This isn’t to say that Barbershop Simulator is a gritty self-serious look at the competitive world of beard grooming, but it is still a game… kinda.

It’s not finished, to be fair. Also, it’s free, and as far as virtual shaving games go, it’s easily in my top five. Though I’ve never once desired to cut hair for a living, I’d be lying if I said there wasn’t some appeal to completely ruining the visage of an unsuspecting patron, leaving him with nothing but an unsightly neckbeard and crooked sideburns. The 30s feel and soundtrack do lend a zen-like quality to the proceedings, and the controls are simple enough, though not always keen to do exactly as you’d like, one small shake of the mouse often destroying huge patches of hair that you didn’t intend it to, and at one point I was convinced that I’d accidentally slit the gentleman’s throat with a straight razor. In fairness, he liked the Lemmy mustache I gave him, so I still earned a good grade.

The most obvious feature missing (and hopefully upcoming) is the ability to do any work above the ears, all of your business coming in the form of pompadoured Ken dolls with dead eyes. The true dream in a game like this is the ability to give someone a Road Warrior haircut after they ask for a little off the top; to hold the chin of a stranger at a weird angle and awkwardly talk about weather and/or the plight of local sports teams.

In my humble opinion, Barbershop Simulator can’t truly be considered a success until I can give everyone the infamous Mattingly sideburns. That day is coming, my friends, and it will be glorious.