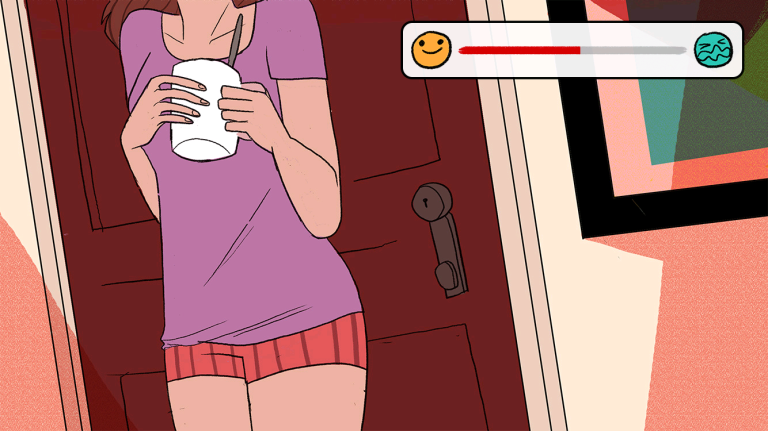 Samantha Browne has a problem.

Content to enjoy the quiet isolation of her room, she’s suddenly reminded that it’s been quite some time since she’s eaten anything. She could, of course, walk out into the communal kitchen of her college flat to make some oatmeal, but… what if there are, you know, people there? What if they look at her? What if they see her somehow making the oatmeal ineptly?

If the above scenario seems completely absurd to you, congratulations, you don’t suffer from social anxiety. For the rest of us, situations like this are all too familiar. We’re able to easily recall times when we were too nervous to ask someone a simple question or excluded ourselves from potentially fun experiences because we simply didn’t want to deal with any peopling that day. As a sufferer of anxiety and a lover of oatmeal, the headless title character isn’t just a quirky girl crippled by indecision – she’s me.

I always take pause when I hear that a game is attempting to tackle mental illness or a specific behavioral disorder, mainly because I feel that often those games are a little too sincere, too self-serious to be relatable to anyone looking in from the outside. They’re forced to look at the subject in question as if it were sitting in an exhibit to be examined, accidentally creating even more distance from the thing they’re attempting to understand.

Much like an anxiety sufferer, the game is exceedingly self-aware, which ironically manages to work in its favor. It realizes that simply getting out of bed and picking a spoon is an innocuous experience to most people but an unbelievable accomplishment to others, making sure to spotlight these things in as humorous a manner as possible. “Okay good, I totally didn’t screw up this simple task” is a very real thing that runs through the minds of way more people than you’d think, even those that you may not normally categorize as “awkward”.

That’s the sweet spot, I think. Portraying people that aren’t just defined by simple categories; humans that just so happen to suffer from a condition. That’s not to say that games specifically based around the concept of expressing this sort of idea or mood can’t work, after all, Average Everyday Adventures of Samantha Browne is one that works beautifully, with the potential to actually educate those that don’t quite understand how some of us are wired. But I do wonder how many people we can reach that we wouldn’t otherwise, or how many others that suffer from the same condition but don’t feel that the game captures their perspective in a very specific way. It’s tricky. For every person that Samantha speaks to, there could be just as many that would hate to be compared to her.

If nothing else, it presents an obvious path for us going forward. Stories and characters like this are necessary for us to even reach a point where more nuance is possible. To use a word that’s become rather scary for some people on the internet – representation is important.

Without it, we may as well all stay in our exhibits, preferably covered in a nice blanket with some oatmeal.