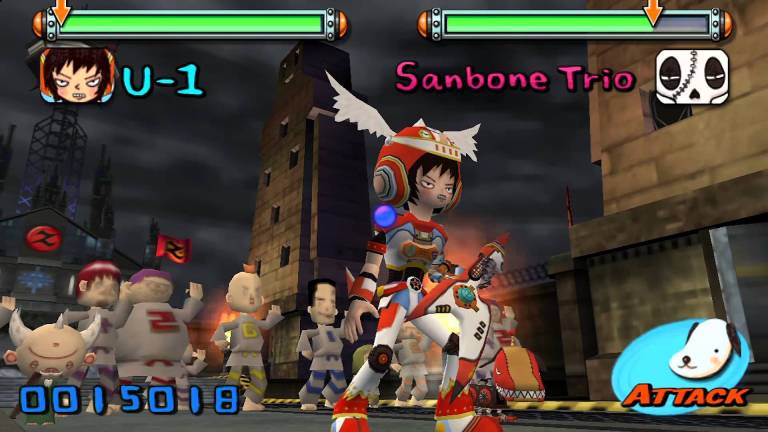 Upon uploading my most recent videos to Youtube for my dozens and dozens of adoring fans, it came to my attention that the games I want to show off the most are frequently of the wackier sort, maybe not in the traditional comedic Let’s Player sense, but in terms of presentation and design. In a lot of cases, they come from a different point in gaming history, when audiences were looking for something different, or, as was the case in 2001, we weren’t really sure what we wanted. The PS2 was still a new shiny thing, but RPGs and platformers didn’t feel like the dominant genres any longer. We were kind of still figuring things out until Halo showed up at the tail end of the year, setting the stage for where we eventually headed, for better or worse.

For that reason, 2001 was a really good year for new and interesting stuff, the likes of which we’d never see these days. Japan was still a development leader and the PS2 started to get a lot of really oddball imports like Mister Mosquito and Stretch Panic, which were about being an insect and using a magic scarf to fight cartoon boobs, respectively. They were responsible for the entire music genre as we know (and have mostly forgotten about) it, but before we got what turned into Guitar Hero, there was Gitaroo Man.

It’s pretty much impossible to describe the game without coming off like someone asked to make up a wacky Japanese anime off of the top of your head. You’re a pathetic weakling named U-1 that has a magic talking dog that possesses has the power to turn you into a superhero for some reason, which is helpful because apparently everything in the universe wants to kill you and can only be stopped by the tasty licks emanating from your guitar of power. During your journey, you fight a demon baby, a series of aliens, and a man in a bee suit that fights with a trumpet. At one point a shark chases you through an EDM tunnel. Then you play an intimate acoustic set for your girlfriend under a tree before skeletons attack you with flamenco music.

Honestly, if it wasn’t for the mecha reggae sequence (not a typo), it would probably be the closest we ever got to a Tenacious D game, though I suppose the rights to a Gitaroo Man movie wouldn’t be too expensive to acquire. The fact that I’d look into it is probably a good reason that I have not yet been trusted with the billions that I would need to become the eccentric billionaire I was always destined to be. It’s a story begging to be told, though, credit to the game itself, it spends a considerable amount of time in cut scenes attempting to exposition the completely nonexistent story of “oh shit, there’s a thing, kill it with rock!”

Actually, that’s going to be my working title. Look for it whenever Jack Black feels like returning my calls.