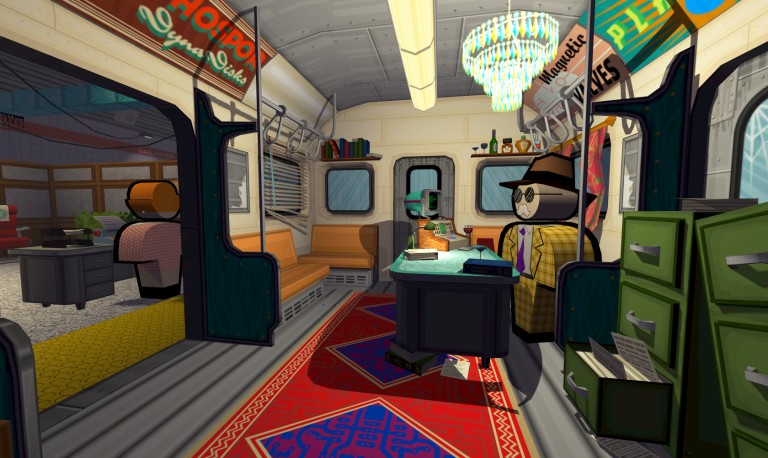 I guess I’m determined to make this the strangest week ever.  Please look forward to tomorrow’s entry, where I describe my time with San Diego Zoo Presents: The Animals! for the Sega CD.  Full disclosure, I’ve been sick most of the week, hence why the site has more often felt like “TonightIPlayed” lately.  Suffice to say, the high-octane action titles that are a regular part of my gaming diet aren’t really going to cut it at the moment.  There’s also the fact that I’ve been writing about games for 200-ish days straight and need to decompress a bit.

I’d been sitting on Jazzpunk for a while, intending to write about it within the first few weeks of the year, since it’s exactly the kind of game that I love to champion and often rush to sing the praises of.  For some reason, however, I drifted away, leaving myself unsure if I’d ever find the time or desire to return and finally finish it.  The beautiful thing about Jazzpunk is that it doesn’t really seem to mind one way or the other.

To find a reference point for the type of experience one is likely to have, my brain goes back to a game like Panic!, which was quite literally nothing more than a series of sight-gags and puns that lead you from room to room, or Monty Python’s Complete Waste of Time, which came out the following year and offered the same level of absurdist humor that Jazzpunk does.  It’s certainly not for everyone, considering just how heavily it leans on its humor to the exclusion of just about anything else, but even understanding that comedy is such a subjective thing, it’s difficult to imagine anyone playing through Jazzpunk without finding something to laugh at.  It’s an exercise in controlled madness that feels like it’s always just a second away from imploding upon itself, unable to keep up the facade of a consistent universe for a moment longer.

Indeed, there were times when it felt like Jazzpunk could have pivoted, using the comedy as a gateway to something terrifying or even more surreal, as if you were bound to discover the true nature of things.  Ironically, it keeps things together by always committing to the idea that nothing matters and everything is stupid, including itself.  It’s cheerful nihilism, as opposed to the kind that can feel overbearing and preachy (looking at you, South Park).

Again, it’s Monty Python – where silly walks and dead parrots are gateways to a zen-like comfort within its own skin, and by proxy, yours.  Jazzpunk simply does not give a shit; not because it’s too cool, not because it’s smarter than you, but because it doesn’t need to.  And neither do you.