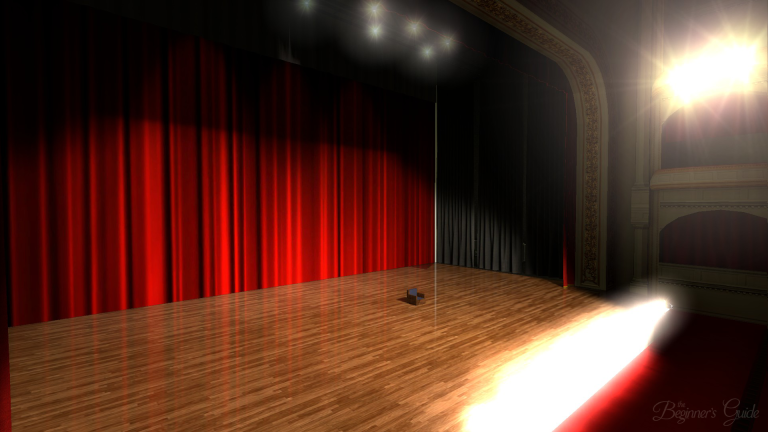 No pressure or anything.

I often do wonder though, if I’m adequately equipped to speak about certain works, putting them on a pedestal that’s only worthy of critique from the field’s best academic minds.  The irony being that the very anxiety I have about speaking on The Beginners Guide is really what lies at the heart of it.  It appears to be a story about game design, but really just uses games as a framework with which to speak about authorial intent and the way we consume art as a whole.  It has a very clear, often downright hostile, message about critics, which puts me in an odd situation.  If I question its meaning, I’m somehow part of the problem.  If I claim to understand its meaning, I’m still part of the problem.  If I say nothing, not only do I cease being a critic, but I then concede that it’s somehow above critique.

I don’t necessarily agree with that, as you can probably guess by the fact that I’ve continued to type.  I didn’t spend a whole lot of time hand-wringing and thinking aloud to myself “what does it all mean?” at the end of my time with the game.  If anything, I felt like I was being lectured to- more accurately, being chastised for not understanding the very clear rules in place about the relationship between artist and audience, as if only one perspective could ever possibly exist for both.  Something about that just… didn’t sit right with me, even more so when I was then told to not bother attributing any more meaning to what I was seeing or hearing.  As someone that’s been both creator and critic, I’ve often found myself in a position where I needed outside validation.  That’s most days for me, if we’re being honest.  I need to know that I’m smart, that I’m important, that I have something to offer the world, even if what I offer is simply commentary on someone else’s creation.  In the eyes of The Beginners Guide, that makes me a villain.

Despite that, I think it’s worth playing, worth drawing your own conclusions about, even if I think it works much better as a linear story about insecurity and obsession than as a morality tale that forces us to turn the mirror on ourselves.  If I can be granted a moment with which to act in complete defiance of what The Beginner’s Guide wants, I think it’s a good video game, albeit a little too concerned with hitting you over the head at points.  Experiencing it in a vacuum, taking time to appreciate the glimpses behind the curtain of game development, it’s something I’d feel lesser having not gone through.  I just wish it liked me more.  I never had anything but the best of intentions.

Again, I guess that makes me part of the problem.