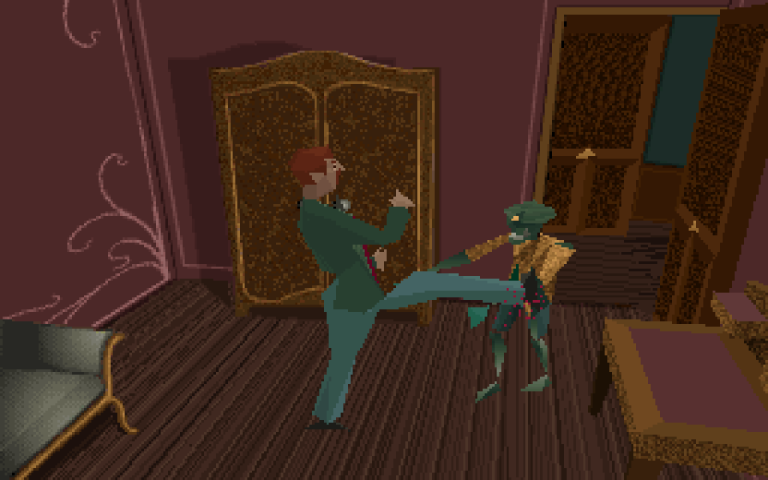 There are two ways to consume Alone in the Dark in 2016; either via the remaining merit it may still have in a modern context or, somehow, through a lens painted by the time in which is came out. Obviously, the former is less desirable, as playing the game now is often an exercise in frustration, running into issues that the industry as a whole have long since solved. Somehow, early 3D also has the effect of looking and feeling more rudimentary than a lot of the stuff that came before it. At the time, we were still trying to figure it all out; what kinds of experiences were desired or even possible in this new realm.

That’s why a little bit of perspective is ideal. Alone in the Dark was attempting something that hadn’t really been done before; trying to innovate a new genre in a space where most of the rules hadn’t been established yet. In that regard, it’s an achievement. Games were always about empowerment, or, at least, competition. Rarely were you in a situation where you were weaker and less prepared than your enemies. There are a grand total of twelve bullets in the game and far too many threats to deal with. More often than not, running was the best course of action, stripping you of that empowerment and making you feel paranoid, as if you are threatened by everything. Since you are essentially in a haunted house, where many rooms offer their own death traps, that paranoia is justified.

Where it gets a little difficult to find context are those moments where the game is still attempting to be frightening beyond that. It’s ironically named since most of the game takes place in brightly lit, albeit grainy environments. There’s also something to be said for the monsters that pursue you, often looking more like glitches than anything intentionally designed. You also lose a bit of that tension when you discover that a lot of threats can be dispatched via frequent sharp kicks to the junk, rendering the need for firearms useless once you get the hang of it. It’s one of the many reasons that I always found Alone in the Dark’s claim as a work of “Lovecraftian” horror to be a bit misleading. Sure, there are references to the Cthulhu Mythos, but at no point due you feel the influence of the Old Gods; any sort of test on Edward Carnby’s sanity. That isn’t to say that I wanted a sequence involving a karate battle with Nyarlathotep, but the monsters jumping through windows and doors in Alone in the Dark aren’t exactly the kind to invoke madness at the mere sight of them. Unless, of course, you’re really offended by terrible graphics.

To me, the game feels as if it has more in common with a serialized radio play from the 50s, with hints here and there of the Twilight Zone. There’s always something new and crazy around the next corner, many of which are never seen again. It’s that variety that makes it feel oddly progressive, even now. There are risks being taken, perhaps even unconsciously since there was no standard to follow.

The downside is that, despite being so influential, the Alone in the Dark franchise seems to lack an identity of its own, defined mostly by the games that used it as a jumping off point. Constant reboots have homogenized the concept and rendered the name dormant, only dropped when someone wants to talk about the history of Resident Evil and the survival horror genre as a whole. The irony there is that it’s created a situation where that original clunky game is probably still the easiest to recommend, even if you can’t entirely put yourself in the shoes of someone from 1993.